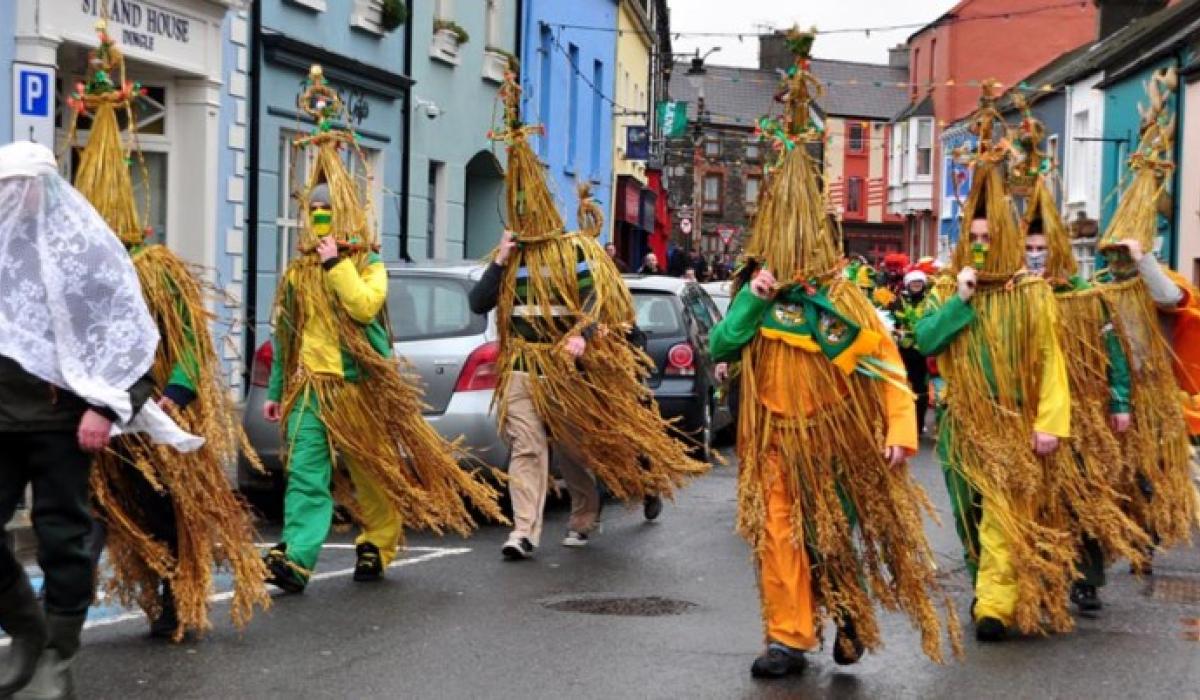 The troglodyte boy procession and the Irish tradition of St. Stephen

Ireland celebrates Christmas in much the same way as many other countries in the world, but we have quite a few traditions and customs that are quite specific to this island.
Christmas in Ireland lasts from Christmas Eve until the feast of Epiphany on January 6 and it is on December 24 that one of the traditions marks the start of the holiday season.
For example, after sunset on Christmas Eve, a large candle is placed on the ledge of the largest window in the house and lit as a welcome sign for Saint Mary and Saint Joseph.
The feast of Saint Stephen, the first Christian martyr, is celebrated on December 26, and in Ireland is often referred to as Lá Fhéile Stiofáin or Lá an Dreoilín or Wren Day. Traditionally, it is also a popular day to visit family members and go to the theater to see a pantomime.
The name alludes to several legends, including those found in Irish mythology which link the life of Jesus to the cave bird. In a tradition that is fading into almost all parts of Ireland, people dress in old clothes and straw garments and travel door to door with fake troglodytes during which participants sing, dance and play guitar. music.
Depending on which region of Ireland you are in, participants are referred to as ‘wrenboys’ or mummers. The Mummers carry on the tradition in the villages of New Inn, Co Galway and Dingle, Co Kerry. In the north, the tradition is still often observed in County Fermanagh.
The tradition has its roots in ancient Ireland when a real wren was killed and carried in a holly bush attached to a long pole – nowadays fake birds are used.
The Wren is one of the smallest birds in Ireland, but it has a very loud song and is sometimes called the “king of all birds”.
This is because of the legend of a small troglodyte who straddled the head of an eagle and boasted that he “flew higher than an eagle”.
Cave dwellers were hunted for many years all over Europe during medieval times, Ireland being no exception.
In most parts of the island, the tradition died out at the beginning of the 20th century and the rhyme often used during the procession was “The wren, the wren, the king of all birds.” The day of Saint-Etienne was caught in the gorse. Even though he was small, his honor was great. Jump me up, guys, and give us a treat.
In the past, the captured wren was attached to the wren’s leader’s staff or a net was placed on a fork. He would sometimes be cruelly kept alive, as the popular mummer parade song says “A penny or a tuppence wouldn’t hurt him.”
The song, of which there are many variations, asked for donations from the townspeople. A variation sung in Edmondstown, County Dublin was: “If you don’t have a dime, half a penny will do.” If you don’t have half a penny, God bless you!
Often the boys would give customers a bird’s feather to bring them good luck. The money was used to organize a dance or “Wren Ball” for the city on a January night.

Saint Stephen, the first Christian martyr, was stoned in Jerusalem in AD 34.

The Wrenboys would go from house to house in the countryside to collect money, but in the towns, the groups were more organized and there was often an element of factional struggle. In either case, there would be a cave captain, usually wearing a cloak and sword, musicians, straw boys, and others dressed as old women or the like.
It’s a day of wild revelry and people usually hide their identities so they can play tricks on their friends.
This type of behavior is typical of Celtic festivals as a kind of purge.
The group of young boys has grown to include girls, and adults often join them. The money collected from the inhabitants of the city is now generally donated to a school or a charity.
The celebration of the troglodyte may have originated in Celtic mythology. Ultimately, the origin may be a sacrifice or celebration of Samhain or in the middle of winter, as Celtic mythology considered the wren to be a symbol of the past year. The European Wren is known for its singing habit even in the middle of winter, and its name in the Netherlands, “King of Winter”, testifies to this. The Celtic names of wrendraouennig, drean, dreathan also suggest an association with Druidic rituals.
In the Welsh version of the myth, Lleu Llaw Gyffes, a Celtic hero, earns his name by hitting or killing a wren. He hits a troglodyte “between the tendon and the bone of his paw”, making Arianrhod, his mother, say, “it is with a skillful hand that the blond hit him”.
It is then that Gwydion, his adoptive father, reveals himself by saying Lleu Llaw Gyffes; “the blond with the skillful hand” is her name now “.
And, on the Isle of Man, cave hunting is associated with an ancient enchantress or “fairy queen” (or goddess) named “Tehi Tegi” which translates to something like “beautiful gatherer” in Brythonic. The Manx spoke Brythonic before switching to Gaelic). Tehi Tegi was so beautiful that all the men on the island followed her everywhere in the hope of marrying her, and neglected their homes and fields. Tehi Tegi led his suitors to the river and then drowned them. She was confronted, but transformed into a wren and escaped. She has been banished from the island but returns once a year when she is hunted.
The myth most often told in Ireland to explain the festival is that God wanted to know who was the king of all birds, so he issued a challenge. The bird that flew the highest and the farthest would win.
The birds all started together but fell one by one until only the great eagle remained.
The eagle eventually got tired and began to descend lower in the sky.
At this point, the treacherous Wren emerged from under the eagle’s wing to soar higher and farther than all the others.
The tradition may also have been influenced by Scandinavian settlers during the 8th-10th century Viking invasions, although it is generally attributed to the “Christianization” of ancient pagan festivals by the saints to ease the transition and promote conversion. 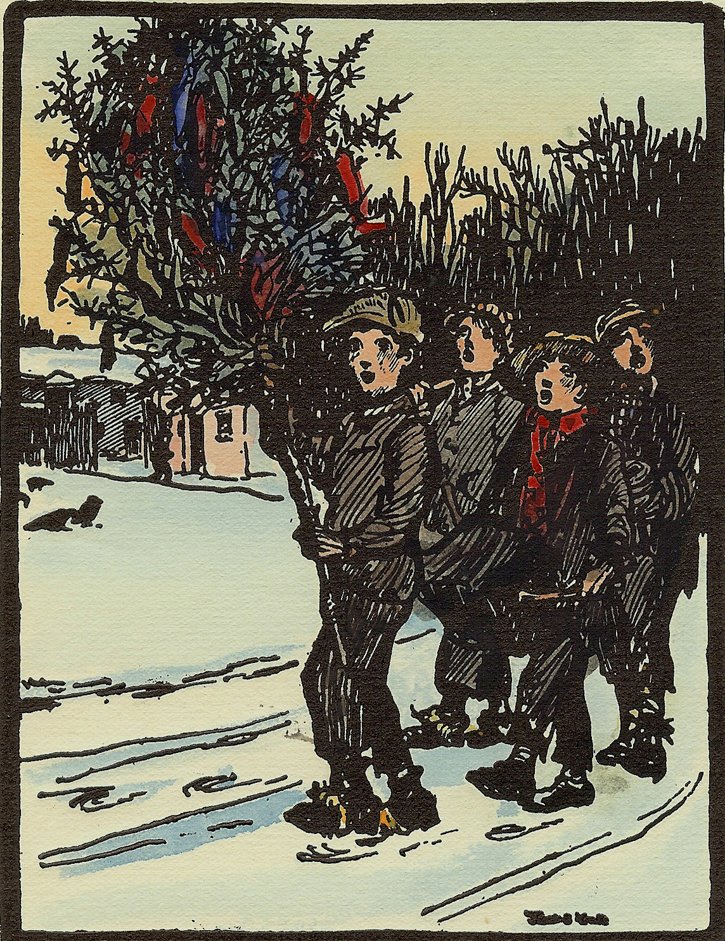 A representation of the troglodytes taking part in the procession of Saint-Etienne.

Various associated legends exist, such as a troglodyte responsible for the betrayal of Irish soldiers who fought the Viking invaders by flapping their wings on their shields.
In 1955, Liam Clancy recorded “The Wran Song” (“The Wren Song”), which was sung in Ireland by wrenboys.
In 1972, Steeleye Span recorded “The King” on Please to See the King, which also reflects the tradition. They did another version, “The Cutty Wren”, on their Time album. “Hunting the Wren” is on John Kirkpatrick’s Wassail album!
The Chieftains made a collection of wrenboy tunes on The Bells of Dublin.
In the song “The Boys of Barr na Sráide”, based on a poem by Sigerson Clifford, the troglodyte hunt is also important.

2019-12-26
Previous Post: Here’s how to play 12 Christmas pubs, an Irish tradition with bizarre rules and lots of alcohol
Next Post: Irish tradition forgotten when boys were free to tie up girls